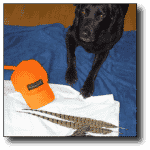 Little did I know what I faced on this November 1, 2008. I knew these facts - Pheasant season opened also in Kansas for the first time on November 1. Duck season opened at the pits today (middle zone MO). Youth Gun opened in Missouri, while Pheasant/Quail opened in Iowa.

Lucky for me I had scouted this Missouri property last week. When my alarm rang at 5:30 a.m., I had no clue what was waiting to greet me as I routinely put "my dog Fay" out to do her business. FOG!!! FOG!!! Dense FOG! I couldn't see more than two car lengths in my neighborhood. My only hope was that the fog was local. IT WAS NOT! I35 north was bad. I was holding my speed at 40 to 45 MPH, but there were idiots out there still doing 60!!!

I kept telling myself, "OK, so you are going to be late. There is nobody waiting on you so relax, take it easy and above all be as safe as you can be." These idiots speeding in the fog must have a death wish! The deer pose a deadly number to the equation when you add poor visibility to the situation. I will admit to "white knuckling it" for several miles that morning.

Arriving at what was expected to be the rallying point, the fog was as thick as ever. Since I didn't have anyone to "rally with," I settled in for a good sit-down breakfast. It was around 9 or 9:30AM when I felt it was safe enough to hit the field. Fay seemed bewildered about the delay.

How was this fog going to affect the pheasants? Should I start out in the corn and work the CRP later? The corn just looked too inviting, so that is where Fay and I started. The soil was surprisingly soft. Was it due to the heavy fog? Walking uneven, slippery ground gets to your lower back in short order. Fay did get excited over a scent of something, and was running around in circles in the standing corn. The sound of her feet crunching the dried corn husks was amplified by the fog. That was the only excitement we had for the first hour. After retreating to the car for water and an energy snack, we headed out again. This time we were going to work the CRP and draws that bordered the corn.

The fog was still prevalent when a "covey bust" started my heart racing. Ten to twelve quail busted early, out of gun range. Perhaps the fog had something to do with them being so nervous. I watched them as long as I could, but the rolling type farmland wouldn't allow a good straight line of sight. It wasn't long when I realized the birds had crossed the fence-line and no longer were on our lease.

We took the next draw which was a slight uphill march. Fay gets "birdy." It's easy to tell when the old gal gets a scent. She acts as if she is completely worn out, her tongue hanging almost to the ground, and barely keeping up with me, when her tail starts "cranking" and her pace quickens, her panting subsides, she is zig- zagging staying on the scent. She no longer cares where I'm located. She is fixated on that bird. It is now my job to stay up with her and be ready for an early flush. That is exactly what happened. A rooster pheasant flushes about 40 yards out in front. He's "cackling," as if laughing at our foolish attempt to catch him. A number 5 load from my old 12 gauge 870 pump silences his cackling. He dropped like he wasn't going anywhere, but I knew different. He fell next to standing corn. Fay found where he fell and the chase began. I could hear the running and the change of directions and after a bit no sound at all. Hoping Fay had not lost her touch, I settled down and waited. It was probably 7 to 10 minutes when I heard the slow steady steps of Fay. Until she stepped out of the corn I had no idea whether she had the bird or not...she did!

We worked more draws and CRP, only to be greeted by a couple wiser old roosters whose cackling went unchallenged.

Sunday November 2nd, 2008. The same property with almost the same fog conditions just not as dense. Fay and I are doubtful hunters today. Sore muscles and cramps made life miserable Saturday night and through Sunday morning. Anti-cramp pills saved the day, and also knowing there was that quail covey still untouched.

Not knowing how much my body could take, I felt it best to hit the best looking first. Working that draw that held the covey yesterday turned out to be the right thing. As Fay and I neared the end of the draw near the corn, about 8 quail bust out front but they do a u-turn and go back across the fence off HSP property. I dropped one on my first shot, and decided to mark it and watch where the rest of the covey went. I didn't do either very well. Fay finally dug the young bird out of the high grass and again I could not mark the covey. It was obvious however that they made it over the fence-line.

We spent about 3 1/2 to 4 hours walking all sorts of cover. Two roosters were seen at a distance too far to shoot. The weather was warm... no hot! I was soaking wet. My desire to continue the hunt far outweighed my ability to perform. Four hours was my limit, and I could tell Fay was in full agreement. This trip home was so different than yesterday. Today I had anti-cramp pills and tonic water. What a blessing!