Waterfowling at the Pits II 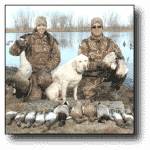 Here's a nice bass I caught at HSP strip-pits south of Amsterdam, MO in a recent outing with my son Bryan. We like to fish the pits all day and have fun and relax. I didn't have a scale with me so as any fisherman I'm going to over guess the weight, ha! I estimate its weight at around 10 pounds, since he was a lot bigger than 8 pounders I have weighed in the past. I enjoyed him, thanked him, I then released him, so maybe some other lucky fisherman can catch him again someday. I caught him on a zoom crawfish colored craw, and he did fight. I've caught a lot of nice fish out of this particular pit. One day my son Bryan and I caught and released 8 bass over 5 or 6 lbs.