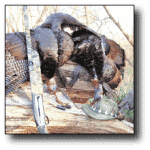 I had a very short hunt on opening morning in Kansas. I arrived at my hunting spot a little later than I wanted, as the song birds were just starting to sing while I was walking in. While I was setting up in a hay field, the toms just started gobbling on the roost down in a draw, very close behind me. I thought for sure I was busted. When they would fly down, they would head to another field. After I settled down, I just shut my eyes, said a small prayer. Then I started softly calling. They got pretty excited, as there was so much gobbling going on I couldn't tell how many toms there were! Then a single hen started in and I thought for sure the game was up. After several minutes I heard them fly down, but I couldn't see which direction they went. I called once more and they responded, letting me know that they were still in the ditch. I shut up and waited. After a short time I saw a black blob in the weeds at the edge of the field about 25 yards out. He saw my decoy and quickly started to strut out on the field. I slowly put down the call and lifted my gun. At the shot he folded and flopped around. Then suddenly a red tailed hawk swooped down on him twice! While watching this odd happening, I heard two more gobbles. They were so close I could feel them in my chest. I pick up my call and gave a soft go at it. Then, three toms and three jakes ran out in the field and started strutting. I dropped the call again and picked out a mature bird and folded the second bird. After the shot the rest of the birds just sat there like they were stunned. I could have bagged more if I was allowed. This whole story probably will take longer to read then the time it actually happened! 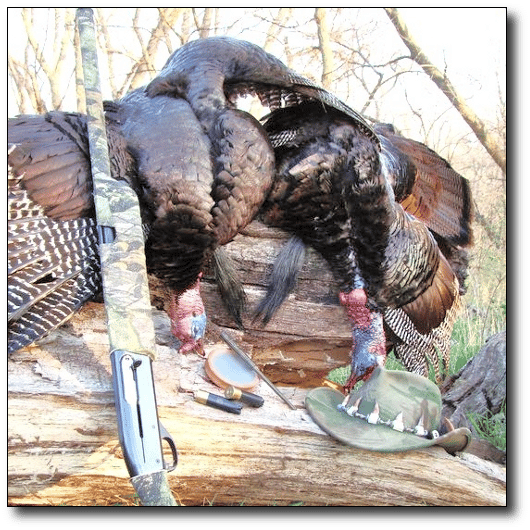