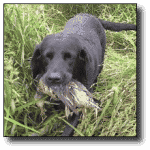 Thursday, two days before the season opener on teal, I was bass fishing at the pits and keeping an eye out for teal. "Zippo, nada, didn't see a single bird.

Once home I checked with my sources for teal in northern Missouri. Received a disquieting "don't know." So I took the day off. I paid the price!

By Saturday the teal were everywhere. The pits had a good opener. Monday afternoon another weather front was moving through. Teal should be riding that front and I was going to be waiting. By talking to those who hunted the weekend, I had a good heads up on which ponds they favored. The harvest reports were also scanned for excellent information. 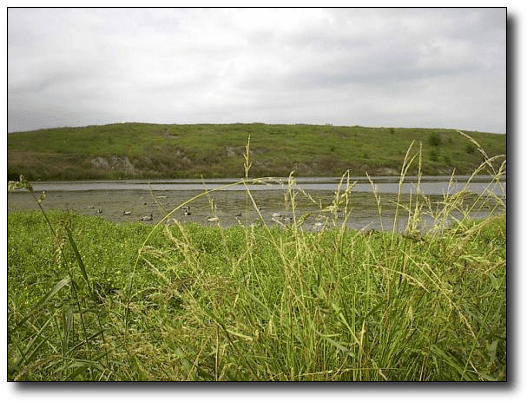 It was just "Fay and me," which is ok, but I prefer to camaraderie of English speaking waterfowlers. As I drove past my pond, sure enough there was a pile of blue winged teal smack dab in the middle. For me to set-up, I knew they were going to flare off and never come back. As expected, they took off, but must have circled 8 times before heading south. I put out 17 decoys in barely floatable water. It was mostly dead brown soppy weeds. I make sure all my decoys are "keel weighted." This means I can toss them out ten or 12 feet and they will "self right" themselves and not lay on their sides or upside down. I have been given some very nice looking decoys, but they were "water keeled." I corrected that by using nuts and bolts and pieces of lead to add just enough weight for them to "self right." Additionally I have an extension pole with a hook on the end to retrieve the deks when I'm done. If the wind or mud is too sloppy, I use a fishing pole with a large treble hook to snare the decoy string. Some members use the treble hook/fishing pole to retrieve their ducks.

It was not long before a group of 40 teal buzzed me from behind. That "whirring" wing beat sound is music to duck hunters' ears! They were past me in a flash, but I clicked on my "Mojo" and gave a couple short quacks from my duck call. They turned and headed straight to my decoys. With a flock of 40 teal, all within 30 yards, I had difficulty picking out a single bird. If I shot the lead bird, 10 could have fallen! As they made a pass over the decoys they broke up just enough for me to pick a low bird and drop him. The caused the main flock to scatter and gave me two more opportunities to score again. I didn't. Enough said.

Fay was on the blue wing in fine fashion and after delivering it to me, she licked it several times. She must have been thinking "Hum, so its' that time of year again!"

Two to three groups of six or seven birds buzzed me from behind over the next hour or so, but they seemed spooky. Perhaps they were from that first bunch.

The biggest flock of teal I have seen in years circled my blind from the north, so I had plenty of warning. After circling twice, in they came. Two fell. Fay started after the first bird then stopped. She looked at the second bird then back at me. We got the easy one first and the farthest last. While walking back to the blind, 6 more blue-wingers made a run at my spread.

I wish all duck hunts were that easy. 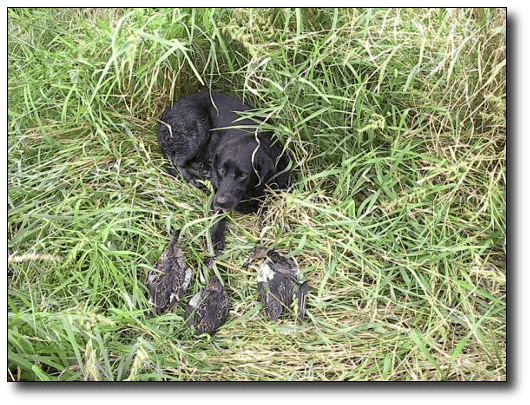