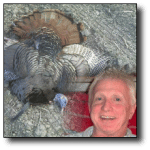 The date of the kill was April 20th, the second day of the Missouri Turkey Season. The farm I was hunted was scouted Sunday, April 18th. As scouting days routinely go, it was a good scout. I scouted in the late afternoon and saw six different turkeys. Each was alone and from a distance. I couldn't identify the sex of the birds. I also heard afternoon gobbling from the nearby property. To add to the good afternoon, I saw eight mature deer, also at a distance. The 195 mile trip was worth every mile of the drive to begin my opening day hunt. I was confident that with or without a kill, it was going to be a good hunt.

Opening day was an unbelievable "gobbling morning." I heard more than 5 different birds gobbling, all from different directions. My plan to get near the area where the bulk of turkeys were sighted the day before was working. My strategy was a new one I wanted to try. It was to get within a couple hundred yards of a gobbling bird and wait for him to sound like he was on the ground before I would make a call. When the bird sounded like he was on the ground and much of the surrounding gobbling had slowed, I made a fly down cackle, a few yelps and a cluck with a box call. I was immediately answered. I had a strutting gobbler and hen decoy set up in a freshly planted corn field. I was tucked back inside the woods edge about 15 yards and about 30 yards from the decoys. Unfortunately the gobblers decided to go away from my occasional calls even though they readily answered. After I stayed in my first spot until 9 A.M, I decided to try a major dusting area on a high spot in a different area of the cornfield. I heard 3 different gobbles over the next three hours and all of them were quite a distance from me and none answered my calls. Around 1 P.M. I called it a day.

On Tuesday morning I was back out early and I located myself nearer to the direction the turkeys (the day before) had headed. Gobbling started early but was not as intense as the day before. My strategy on this day was to get a birds attention on my calling before fly down so I knew I had his attention. After getting 2 or 3 certain quick answers to my cackles and yelps, I stopped calling until fly-down. After fly-down, the gobbling was very infrequent and nothing really responded to my calls enthusiastically. I made infrequent calls every 10 minutes or so and about 7:30 I heard a very far away bird and called to him. He answered and I cackled to see if he would answer again. He did immediately. I was thinking this is wasted calling as the bird was too far to be able to call him from that distance. I thought I would call infrequently to keep him interested and if he didn't come to me, I would head in his direction in an hour or so after he quit gobbling and try another strategy if nothing else came my way. A few minutes later the turkey sounded closer but still distant. I figured he was strutting very far away. I switched to alternating between my box and a slate. With the box I cackled and yelped and with the slate I purred and clucked. The bird answered both calls several times and I could tell he was getting worked up but I still thought it was a long shot and wishful thinking to believe he would come all that distance to me. I then noticed the bird had changed locations and had moved closer but not in an angle directly towards me. He was circling. He eventually made it to where he was over the ridge maybe 250 yards from me. He was coming. I purred and clucked and each time he readily responded. I was now starting to believe this just might end up a successful day. Finally after about 20 minutes I saw him all fanned out and his red head tucked dead center of his walk. This was becoming like a TV show. I clucked and decided he had located the decoys that were set up similar to the day before and he was coming. I readied my my Mossberg 12 gauge, with 3 1/2" number 5 shot. I started telling myself what kind of shot I would take to assure a good kill. The bird circled from the side and kept making progress getting closer and closer to the decoys. Finally his head appeared in an opening in the brush I was tucked behind and I told myself to hold 1 inch under his head and fired at 39 yards. The bird dropped immediately and he didn't move a feather after the shot. He never knew what hit him. I sat there for few minutes to calm down and thanked God for the great hunt and hoped that my dad was looking down from above smiling at my success.

Thank you HSP for the membership. Every time I get on another farm I "love it more." Last year deer season was fantastic and I am looking forward to going after another bird for the 2nd half of the season. Thank you so much. I wish I would have known about HSP years ago. What a bargain. I am looking forward to more great outings and hopefully meeting additional hunting buddies. Hope you enjoyed the description of this hunt as much as I did writing it. Being there was memorable.