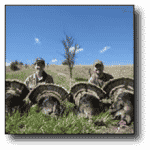 On the hunt with my wife, the first day I was actually by myself. I spotted three toms when pulling up to the property at noon. They were all following a single hen and gobbling. I parked the truck and made a big loop to get out in front of them. Immediately after setting up, a few yelps got these birds fired up. They started gobbling like crazy and came in on a string. No decoys. It was pretty thick with evergreens, and all three birds actually got to about eight feet before I had a shot. I managed to get the biggest Tom in the bunch. Measurements were: spurs 1 ¼ inches, overall weight- 22lb, with a 9 inch beard. It was an experience I haven't had many times. Thirty minutes on a property, at noon no less and I had a nice bird in the bag.

The next day I went out before daylight. Set up not too far off the roost. Didn't get any in right off the roost, but later had a few come calling. Managed to get a double out of a bunch of birds that came in to the decoys. I was tagged out at this point with my three birds. Measurements: Spurs 3/4" weight 20 lbs, 7" beard; Spurs 1" weight second bird 21 lbs, with a 9" beard.

I roosted some birds that afternoon. My wife and I went out the next morning and set up on these birds. She is new to turkey hunting but she has taken a few so far. Her first birds were a few years ago. I called in two Rios in Kansas off the roost and she shot both birds with a single shot at 12 yards. She almost reproduced that this hunt. Since I was tagged out, I did all the calling. We were able to watch the birds fly down about 100 yards out. We actually had “over 30 birds" come in to the decoys off the roost. Eight were strutting toms, a bunch of jakes and a bunch of hens. One of the hens was actually albino. I got some good video footage of it. These birds came right in to 15 yards and she was able to get two nice toms. The kicker is that she was actually 6.5 months pregnant. What a trooper. We hunted around the rest of the day for her third one but ended up not having any luck. Unfortunately, this was the last day we could hunt. It was pretty awesome though, about 48 hours of hunting and 5 nice toms. My wife's two birds measured: spurs 3/4"; weight- 18 lbs, with a 10" beard; second bird had 3/4" spurs; weight- 19 lbs, with a 9" beard.

For the Iowa hunt with my buddy. We went out this weekend to try to get my buddy his first bird. We went in blind Saturday morning and set up. We had four or five gobbling but they were pretty far away it sounded. we stayed there til about 0900 or so then packed up to move to a different unit. We spotted some birds out in the field of the next unit and decided to put a stalk on them. we had 3 strutters and a few hens in front of us. 2 hours later we still hadn't made much ground on them and we heard a gobble from behind us. we forgot about the 3 and went set up on this bird (no decoys). I put my buddy out in front, and I set up about 20 feet behind him. About 5 minutes into it, I had the bird very excited and sounding as if he was coming in. then I hear a gobble blast out from the brush behind me. Those three toms had snuck in right behind me. I let them pass by once trying to get them in front of my buddy but they just wouldn't cross the tree line. As bad as I wanted him to shoot one, I couldn't let them walk. I let one of them have it. He just folded on the spot.

By this time it was 1300 so we scouted around for a few hours and then roosted some birds. The next morning, we snuck in and set up the blind and decoys (strutting tom and two hens). Ended up having toms all around us on the roost. most of them flew down, took a look at our set up, and eased off. There were a few we heard on the roost a couple hundred yards out and those birds got interest about an hour after sunrise. Eventually they (3 toms) made their way into our field. they ended up flocking up with 3 hens and 5 jakes. We watched these birds for 2 HOURS strutting around. the jakes came by and we let them go. One of the toms bred one of the hens and then finally they made their way to our setup. we had all 3 toms and 3 hens come in to 25 to 30 yards. My buddy picked out the biggest one, and I let out a kiki run. The birds popped up their heads and my let his shot ring out. His bird folded. The other two just sat there confused as the hens ran off. It was a great hunt. My buddy shook for a solid 5 minutes he was so excited. He had been trying to get a tom for 3 years now. His bird measured in at 1 1/16 spurs, 18# 9oz, 10in beard. 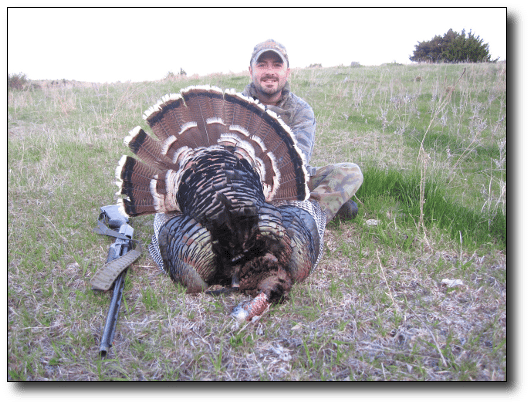 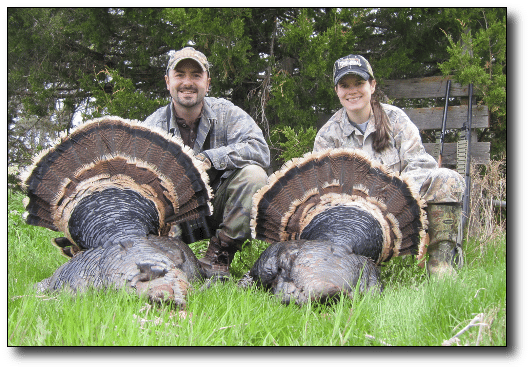 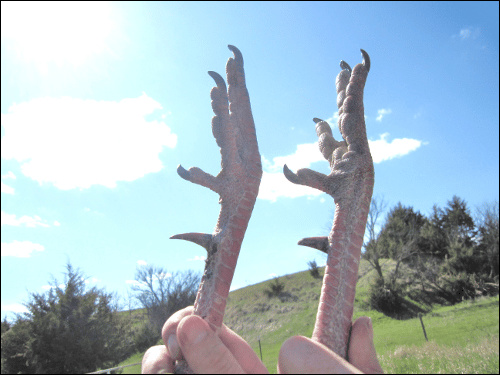