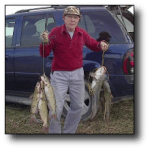 My fishing buddy Tom (and HSP member) and I had been trying to schedule a fishing trip at the pits for channel catfish. at least two weeks were wasted due to one conflict or another.

I thought that the weather had been warm enough, that the catfish should be out and about searching for food. Then I got a report that bass were being caught. I knew then that our timing should be about right.

Without a boat, we were restricted to shore fishing. With my back still a problem, we needed to select a spot close to the water.

Picking a pit or pond at the strip pits is always challenging. Some members have their favorites and don't have that dilemma. I have caught so many different species of fish out of so many different pits or ponds; it seems I have to always try one or two before calling it a day.

We were also there to pickup my 2 man bass boat and trailer that I had left for anyone's use during the waterfowl season. I'm going to re-evaluate that next year. The cattle, too dang curious for their own good, stepped inside after rolling it off a fence post. The damage was repairable, but made it unusable this day.

While checking the boat we decided to spend an hour or so at the nearby pond. after an hour without a strike, we decided it was time to head to our original pit.

We were unable to locate an area in which I could drive to the waters edge. In fact, we had to walk down a pits steep bank about 55 - 60 yards to a nice flat area that easily accommodated two of us with two fishing poles apiece. The walk down was worse that it looked. Two trips to get all our hardware, seats, and baits. I knew then I was in deep trouble. If I caught catfish like I expected, hauling them out was going to take another trip and woe was going to be me and my back if that happened.

This pit was not a clear water pit. It seemed a bit green and there was an obvious current flowing right to left. Then we both noticed that either shad or minnows were being forced to the surface and "something" was feeding on them. I suspected crappie since the surface wasn't "boiling" with action. The feeding fish seemed to be "pecking" at the surface. Every once in a while you would hear a big splash. Now that I figured was a bass getting in on the action.

Now I have learned, yet I admit not totally, that if you are going to fish for catfish, fish for catfish. Don't try for other fish while waiting on 'ol Mr. Whiskers. Each and every time I break this rule, I pay for it. Whether I'm fighting a backlash, trying to free my lure from a branch or working the lure to a hot spot, one or both of my catfish poles bends double! Most of the time, I end up missing those strikes.

It wasn't long before Tom had his first catfish. From then on, for an hour or two, the fishing was fast and furious. We caught around 15 nice cats and kept four apiece. Those four felt like all 15 dragging them up the steep embankment.

I paid the price... but it was worth it. What a way to start the year! 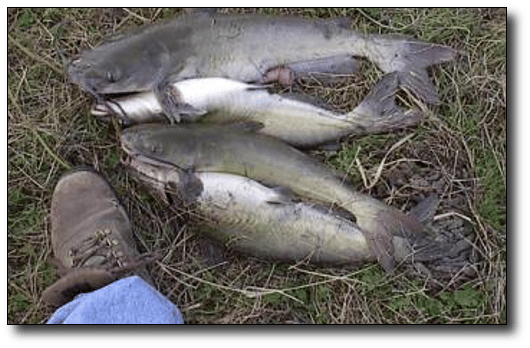