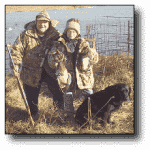 It was Thanksgiving Day, November 25, 2005. My grandson Grant Denny, age 9 from Johnston, Iowa, got his first taste of waterfowl hunting. His father, who was also my guest that day, had been converted to a hard core duck hunter several years earlier. Shortly after marrying my daughter he was put to the test and became quite the avid hunter.

a Thanksgiving Day tradition at the Youngs" is for the men to go duck hunting. But they are expected to return no later than 2 p.m. Prior to their arrival, Grant called and informed me that he was now 9 - years - old and he felt he was old enough to "go with the men." I had no problem with his age and actually was very pleased that he was interested (actually excited) enough call and ask permission to tag along.

The weather would have been my only concern, but it was (reportedly) only going to get down into the upper 20's and warm up into the 30's. This youngster has been playing ice hockey for two years (and he's pretty darned good too) so I knew he could handle the weather. We took extra clothes just incase, hot chocolate as well as hot coffee. Morning snacks and goodies were to keep him interested, if the ducks were not in a cooperative mood.

I selected pond 2 which had a nice blind, and anyone can drive right up to it and unload. Everything went according to plan. The wind was from the right direction and there was no rain, snow or ice. We put out a couple dozen duck and several dozen goose decoys.

The birds were not very active. Grant seemed quite interested in my duck and goose calls, and I got the impression he didn't quite believe this "noise" I was making would attract anything.

It wasn't long before his mind was changed. a single drake widgeon was attracted to our setup (and my calling), and dive bombed into our setup. Gene and I made quick work of him and my lab Fay made the retrieve. Grant inspected the widgeon in great detail. During the next hour we had two drake mallards copy the widgeons" routine and they became easy targets to Fays" enjoyment.

A sudden wind change from the south to the north put the wind directly in our faces and was quite brisk. Our decoys were now out of placement and we had to either move or call it a day. We decided to pickup and head home for a hot turkey dinner.

After all the gear and decoys were loaded, we headed out only to notice a huge flock of Canada geese flying directly over our blind! It happens every time.

Grant got a pretty good education on what waterfowl hunting is about. He's ready to go again, and Grandpa is ready to take him!