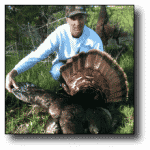 I actually took advantage of the club's Membership Agreement Rules that allow dependents to go hunting, fishing, and camping together at no extra cost. How did I convinced my wife to take the kids camping and fishing for 2 days, so I could turkey hunt in the morning you ask? "You can sleep in as long as you like honey, while I hunt!" With that said she packed the car faster than a NASCAR pit crew and we were off.

The Gobbler sound on my cell-phone alarm kicked me out of the tent around 5:30AM, and by the time by butt hit the ground under the little evergreen tree at 6:10 AM, I heard the first bird Gobble from the roost 200 yards away, on the hill above me. It was a Bluebird Morning. About 55 degrees, nice and crisp, and in my leafy bug suit I looked as green as ever in the little evergreen tree. I made the fly down Cackle as real as possible with my fake wing hat flappin, and big fist ground bump. I expected birds right away since I had hunted this farm before and kind of knew how things worked on this property. Shortly after the Cackle, all the deer showed up so for 30 minutes I did not move. Once the birds left the roost they stopped all the gobbling, so I lost track of them but kept up the gentle clucks & purrs until the closest doe pointed out the Gobbler's behind me that had come in silent. The only sound they made was the spitting and drumming as they approached from behind. Only the larger of the two birds made it dead even with me, 30 yards out, before I lowered the boom on him with my 12 gage. He barely flapped his wings once the shot rang out. I did however struggle getting to him once he was down. You see I had laid the bottom of my nose across the stock of the gun, as it went off, I could barely see straight for all the water in my eyes. I looked a little like a drunkard staggering across the small field, but I was one happy hurt hunter standing on his neck. When the show was over he weighed 23lbs, had a 10&1/4" beard, & 1" Spurs.

A mighty happy little family greeted me at the tent when I made it back to camp with the bird over my shoulder. If moments like that don't make you glad to be a father, nothing will. We all caught buckets of fish in the little farm pond, and had a blast taking pictures of the kids in all the wild flowers, looking at the old junk farm equipment, and my little girl found a big 4 leaf clover. More importantly we all spent quality time together as a family in the outdoors. It is memories such as these that make an HSP membership Golden at any price, for a man that doesn't own his own land.