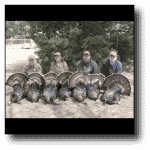 If you notice a slight decrease in turkey numbers this fall... blame it on the weather! Wet cool, spring rains are detrimental to young chick survival rate. The last good nesting and brood rearing from April through June was 2006. Thus, four out of the last five years, in Missouri, the turkey population has been in decline. The good news however, is that in most of the southern part of the state, the poult count was up.

Although some look to the Department to reduce season length or bag limits, such changes would not bring more turkeys. Because males and rarely bearded hens are shot during the spring season, spring hunting season isn't a limiting factor on population growth. Likewise, fall harvest has not contributed to the turkey decline, with fall hunting being mostly self-limiting. Fall harvest lately has been below 10,000 turkeys, a level easily absorbed by Missouri's fall population of almost 1/2 million turkeys. Unless there's a widespread, long-term decline in the population, going to more restrictive hunting regulations isn't going to affect population trends.

Although turkeys are down in some parts of the state, "Missouri still leads the nation" in turkey abundance and harvest. But just like other wildlife, turkey numbers go up and down in response to weather conditions. We have had several rough years recently, but give them two or three years of good weather during the nesting season and our turkeys will bounce back. (thanks to MDC online)

Fall turkey hunting (archery and firearms) is very different from the spring hunt. During the fall, there is little or no gobbling activity and gobblers are in small flocks (3 to 10 birds), while hens and young of the year are together in large flocks (10 to 20 birds). It is not unusual to find two to three hens together with all their young. The avid turkey hunter doesn't care whether it's the fall or Spring hunting season. He just loves hunting turkeys.

The basic strategy for fall turkey hunting is to find and break up a flock, scattering them in all directions. Then locate yourself as near as possible to the spot where you broke up the flock and wait 15 minutes. Gobblers can be called back by using clucks and coarse yelps. Hens and young birds can be called back using hen yelps and/or kee-kee run calls. Young birds usually will return within an hour while an old gobbler may take 3 to 4 hours. Hens and their young tend to vocalize a lot as they return. Old gobblers tend to return silently.

The 2010 Missouri fall turkey season is October 1 through October 31. Limit is TWO birds of either sex. Shooting time is one-half hour before sunrise to sunset. Both birds can be taken on the same day.

For the past five years, hunters afield during Iowa's fall turkey seasons have consistently posted success rates near or above 45 percent. That pretty much proves that the Hawkeye State is one of the best places in the U.S. for tagging a fall turkey.

"Iowa Fall turkey hunting, may be one of our best but most overlooked upland game hunting opportunities," said Todd Gosselink, Iowa Department of Natural Resources upland wildlife biologist. "There are so many other things going on in the fall - waterfowl hunting, pheasant hunting, deer hunting, football -- that people don't have time to try fall turkey hunting. That's too bad, because fall is maybe the easiest time to get a turkey." (Thanks to Iowa Fish & Game).

Hunter satisfaction with turkey management in Kansas and fall turkey hunting remained high following the 2009-2010 season. The percentage of respondents indicating that they were 'satisfied' or 'very satisfied' with turkey hunting in Kansas was near 80%. The percentage of respondents that were satisfied with turkey management in Kansas was slightly lower but roughly 75% still indicated that they were either satisfied or "very satisfied." (KDWP).