It has been said, "That some people have all the luck." Of course, everybody readily knows that beginners fall into that category. Most of the rest of us fall victim to the proverbial "Murphy's Law." I never did like Murphy because I thought he was too much of an optimist. And then, there's my grandson...

"Little Ronnie" was 13 when I took him on his first hunt. We reserved some Hunting Sports Plus (HSP) land, so that meant his chances were premium to begin with. It was a turkey hunt in northern Missouri.

He had passed his Missouri Hunters Education class with flying colors. That was a fact that would come to cause great anxiety for grandpa later.

I had taught little Ronnie how to use a box call and so he insisted on calling in a bird by himself. We sat patiently together until a big tom started answering his carefully timed calls. He was an avid student in the how-to-call sessions I had taught him so he knew when to stop calling. A big, 26-pound bird strolled very slowly into a close shot range, but in a very slight amount of brush. The bird stopped 15 yards away and looked and looked and called and called. Nothing happened. I can see a long beard and that it is a dandy bird. I am on pins and needles waiting for him to shoot the bird. And waiting...and waiting...and waiting. Finally the bird steps out of the light brush and stops again. I wait some more, but I'm so close to my grandson and both of us to the bird, that I'm afraid to do anything to make him shoot because it might spook the bird. I begin to nervously decompose and be resigned to the fact that he is either not going to shoot, for whatever reason, or that he is going to be a disappointed young man when the bird suddenly decides to vacate the county.

Turkey Hunting with Hunting Sports Plus
After another agonizingly long minute, "BOOM!" the gun roared and the bird dropped like a rock and flopped around. We breathlessly went to the bird. I said, in exasperation, "What took you so long to shoot?" He calmly replied, "Grandpa, you also have to make sure you shoot a turkey in the neck and head, so I wanted to make sure I had him dead center." I also learned in my classes that you have to clearly see your target and what is behind it. I thought it best not to try to explain to a young man that the intent of the learning did not mean that you had to have your target as well in repose as that one was!

I made him carry the bird part of the way back to the truck. He unceremoniously and nonchalantly said, "That's a pretty good bird isn't it Grandpa?" I swallowed my jealousy and said, "Yea, not bad. Just next time avoid giving Grandpa a nervous breakdown by shooting him when he is in easy range and not waiting until you can count the strands of hair in his beard." Silently I said to myself, "20 minutes into the season and it's over for him. Why didn't he have to pay the piper for such a long time like I first did? Well, everything will be anti-climatic for him from now on. "He's used up all his luck!" How wrong I was.

Bass Fishing with Hunting Sports Plus
Having forethought expected success, because I knew we were on HSP quality hunting land, I had previously reserved a fishing pond for the afternoon on another piece of HSP land a few miles away. The pond is the only thing on the property, but I had fished it before and knew there were bass in the pond. "Mr. Lucky's first fishing trip, on the same day as his first hunting trip, proved to be another "beginner's luck story!" He caught a monster 7 pound bass! I had showed him how to use the lure in "Dry-Casting" practice at home, and he began like an old pro who had been using it for years.

Two minutes later, WHAM! His rod bent over, he set the hook and the battle was on. I gave him encouragement, between mutters to myself of "Where was this kid born anyway, in a bed of four leaf clover?" Soon after my anxious, breath-holding nearly incapacitated me, and shortly after my flurry of tips of "Hold the rod tip up," "Don't horse him in," "Pull, then wind up, he landed the fish.

Then he said calmly, "Grandpa, this is a hot pond isn't it!" After he caught three more bass, of two, three and four pounds weight, I had to agree. It was either that or the fish in that pond had no chance against that kind of beginners luck anyway. What a spring.

Catfishing with Hunting Sports Plus
The story repeated itself in the summer when I took him on his first cat-fishing trip. It was on some HSP land noted for its' fishing, the (strip Pits). He caught six nice catfish to his Grandpa's one. Of course Grandpa spent much of his time baiting, stringing, and secretly admiring "Mr. Lucky's" fish.

"These are pretty good catfish aren't they, Grandpa?" I mumbled something about beginners luck, but he just spread his big grin, as usual.

The biggest coup came during deer season. Back on the same HSP property that he got his spring turkey on, he shot a ten pointer. He once again left Grandpa a jangled set of nerves as he would not shoot until after an immensely long period of checking out the firing backdrop before shooting the deer, even though I kept whispering for him to shoot and punching him in the elbow. After the deer dropped, I said, "Ronnie, why did you take you so long to shoot?"

Whitetail Deer Hunting with Hunting Sports Plus
"Grandpa," he said, "you have to make sure the bullet won't hit something behind the deer. That bullet can go a looog way! You also have to hit him right where you showed me, and I wanted to hit him right. "That's a pretty good deer isn't it Grandpa?" Somehow out of my strangulated throat I muttered, "Yeah sure is."
"Well I know I can do better Grandpa. I will."
"Yeah, think so?" I muttered, "You're the luckiest kid I know."
"Not really Grandpa," he said with a knowing wink of his eye, undoubtedly garnered to insure future trips, "It's just that you're such a good teacher." 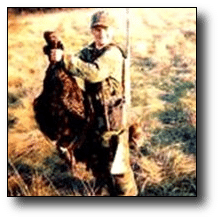 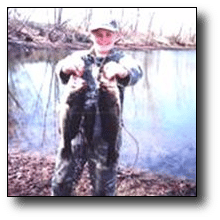 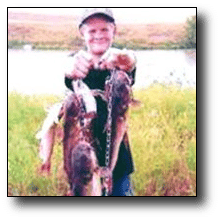 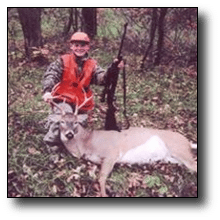